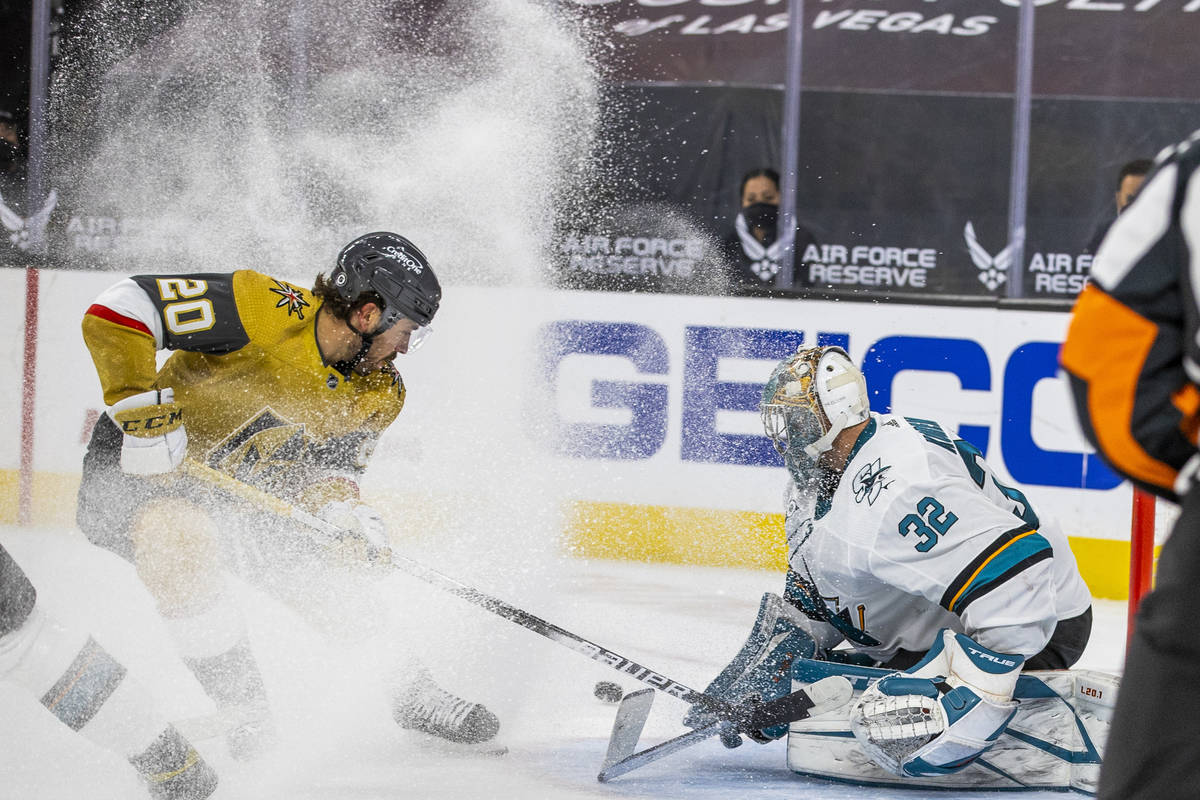 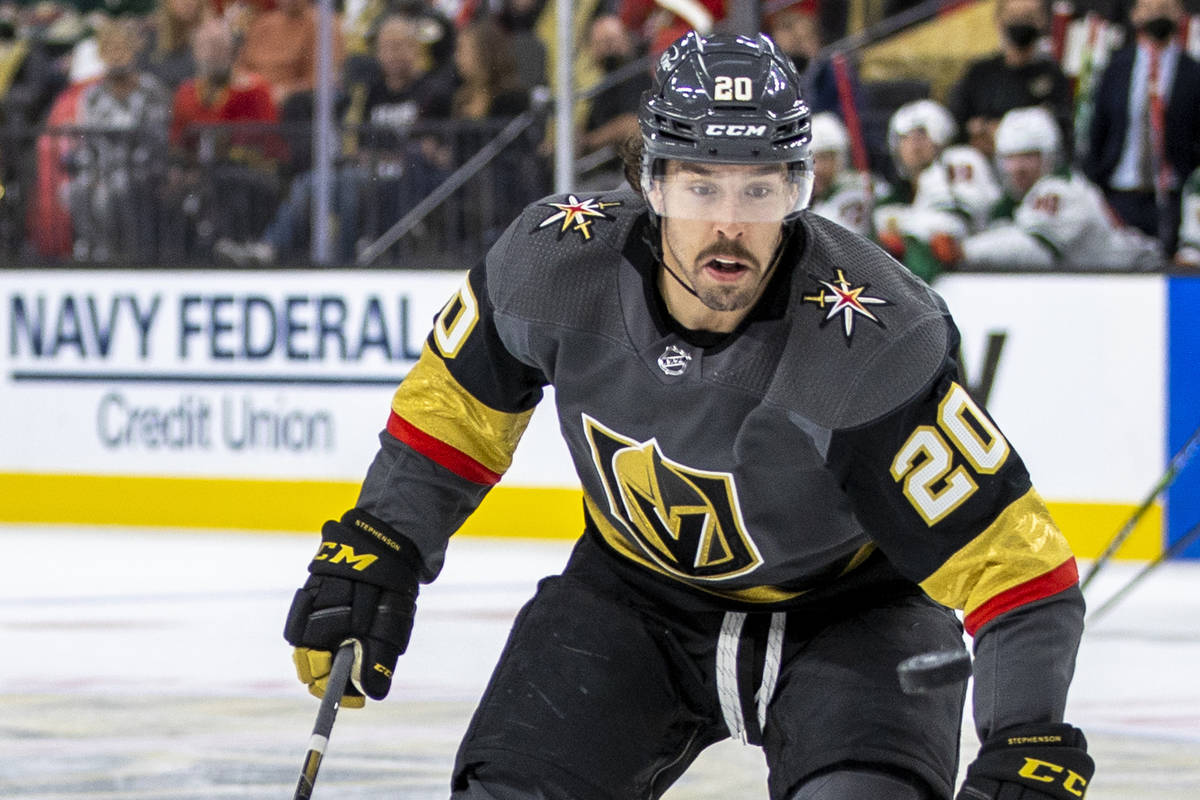 Golden Knights center Chandler Stephenson (20) eyes a puck versus the Minnesota Wild during the second period of an NHL playoff game at the T-Mobile Arena on Sunday, May 16, 2021, in Las Vegas. (L.E. Baskow/Las Vegas Review-Journal) @Left_Eye_Images 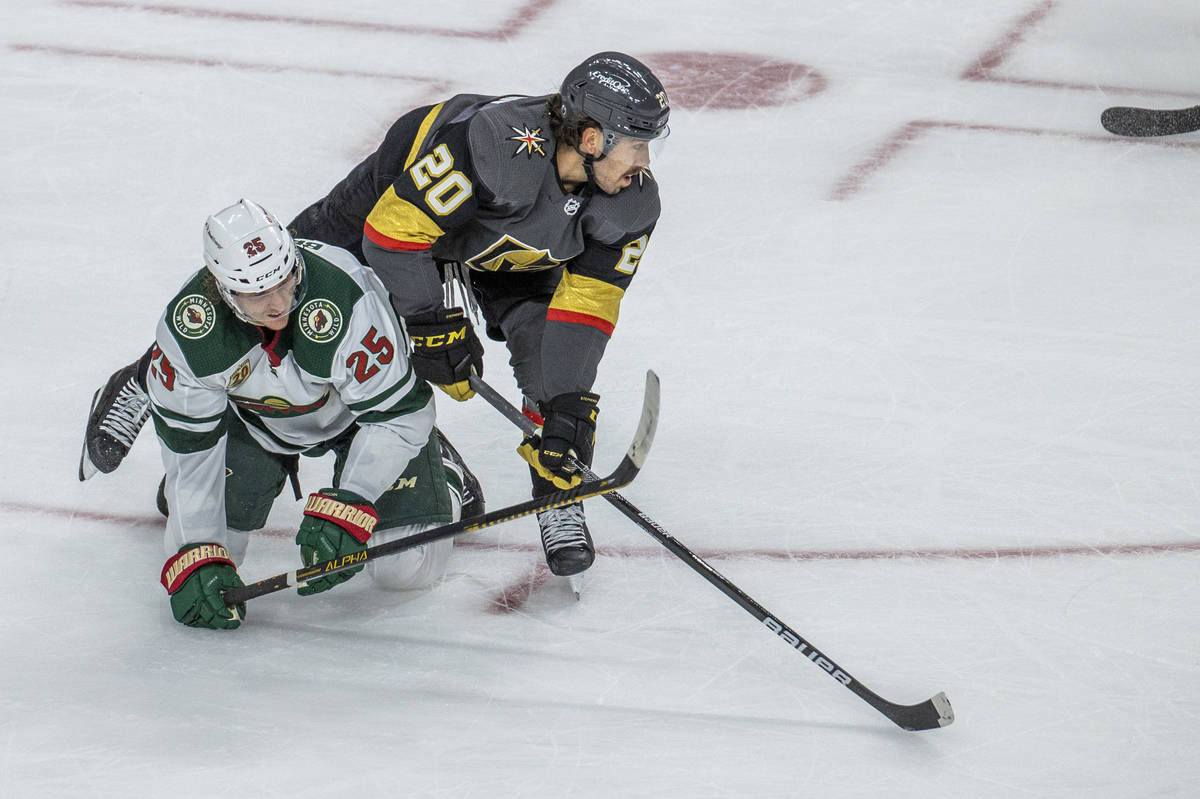 Golden Knights center Chandler Stephenson (20) eyes the puck as he tumbles over Minnesota Wild defenseman Jonas Brodin (25) during the third period of an NHL playoff game at the T-Mobile Arena on Sunday, May 16, 2021, in Las Vegas. (L.E. Baskow/Las Vegas Review-Journal) @Left_Eye_Images

¡¡¡¡The concept of speed in sports is as much urban legend as Walt Disney being cryogenically frozen.

¡¡¡¡There¡¯s much of the latter in this Golden Knights-Colorado best-of-seven series. There¡¯s also a top-line center not named Nathan MacKinnon who can fly.

¡¡¡¡Chandler Stephenson can get going, all right, as fine a skater through the middle of the ice as most anyone in the NHL. He¡¯s a counter to the blur that is MacKinnon.

¡¡¡¡The Knights on Friday beat Colorado 3-2 and trimmed its West Division final series lead to 2-1. It was a victory created in large part by Stephenson¡¯s line bottling up its MacKinnon-led opposition.

¡¡¡¡¡°If you ask anyone in the NHL, Boston¡¯s first line and Colorado¡¯s first line would be in the conversation for the best line in the world,¡± Knights coach Pete DeBoer said. ¡°It¡¯s a big ask. We¡¯re asking Stephenson to play against MacKinnon and that group every single night and try to create offense for us at the same time.¡±

¡¡¡¡The teams meet for Game 4 on Sunday at what should be another frenzied T-Mobile Arena.

¡¡¡¡A leading objective for the Knights: Continue owning a keen awareness of MacKinnon and his linemates.

¡¡¡¡It¡¯s a sizable challenge five-on-five, one Stephenson and Mark Stone and Max Pacioretty more than met in Game 3. But limiting chances at one end hasn¡¯t resulted in them finishing at the other.

¡¡¡¡The trio has totaled just one goal (Pacioretty¡¯s game-winner Friday) and three assists in the series. Much more is needed from those expected ¡ª and a few paid quite handsomely ¡ª to deliver.

¡¡¡¡¡°It would be nice to click and contribute five-on-five, for sure,¡± said Stephenson, still looking for his first point after three games while averaging nearly 20 minutes of ice time. ¡°It seems like we¡¯re doing everything except scoring. I think that will come. We¡¯re not getting frustrated with it as a line. We¡¯re getting our opportunities. It would be different if we weren¡¯t.¡±

¡¡¡¡Stephenson signed a four-year contract extension in October with the team he helped defeat as a member of the Capitals in the Stanley Cup Final in 2018. His arrival in Las Vegas also meant an eventual ascension to the top line.

¡¡¡¡Speed changes everything. Combine it with elite skill and you have a lethal pairing. It¡¯s why MacKinnon teaming with Gabriel Landeskog and Mikko Rantanen can, as DeBoer suggested Saturday, put a fear in your belly if you should lose focus for just one shift.

¡¡¡¡Stephenson also is fast enough to generate such concern, if nothing else his ability to trail a play and blaze past slower defenders in search of Stone or Pacioretty. Playing fast is one thing. Playing fast alongside teammates adept at possessing the puck can translate to a completely different advantage.

¡¡¡¡¡°Ever since I fell in love with hockey, (speed) was a big part of my game,¡± Stephenson said. ¡°Even now in summer training, I want to be quicker and maintain it as I get older.

¡¡¡¡¡°MacKinnon is like a freak of nature, the type of skater he is. So powerful and explosive. That initial or second push, he¡¯s gone at top speed. You see and it kind of wows you.¡±

¡¡¡¡There wasn¡¯t much of a wow factor from MacKinnon on Friday, only the second time in these playoffs that he has been held without a point. But things can change in a blink, which is about the time it takes for Colorado to strike.

¡¡¡¡So while the Knights definitely need more scoring from their top line, shutting things down remains a primary goal. You need speed for that. Stephenson has it.

¡¡¡¡It might not be of the wow variety, but it¡¯s still plenty good.