The following statement was written by the Volvo Workers Rank-and-File Committee (VWRFC) at the New River Valley Plant in Dublin, Virginia. Volvo workers can contact the VWRFC at volvowrfc@gmail.com?or text to (540) 307-0509?.

Brothers and sisters, on May 16 we voted down the tentative agreement endorsed by the UAW in a 91 percent landslide. We voted as we did because the contract was a pro-company sellout, full of givebacks and new mechanisms to drive out core group workers, super-exploit non-core workers and abandon retirees to abject poverty.

In a matter of days this despicable deal！which we aimed to kill outright！came back, reanimated like Dr. Frankenstein¨s monster, in the form of the second tentative agreement. As we wrote on May 28 in our statement ＾Vote no to a slave¨s contract!￣: ＾The 32-page proposal repackages the same manure that we rejected by 91 percent. The nickel here and the dime there are aimed at covering over the fact that not only is the ｀new¨ TA not significantly better than the last, in some ways it is worse!￣ 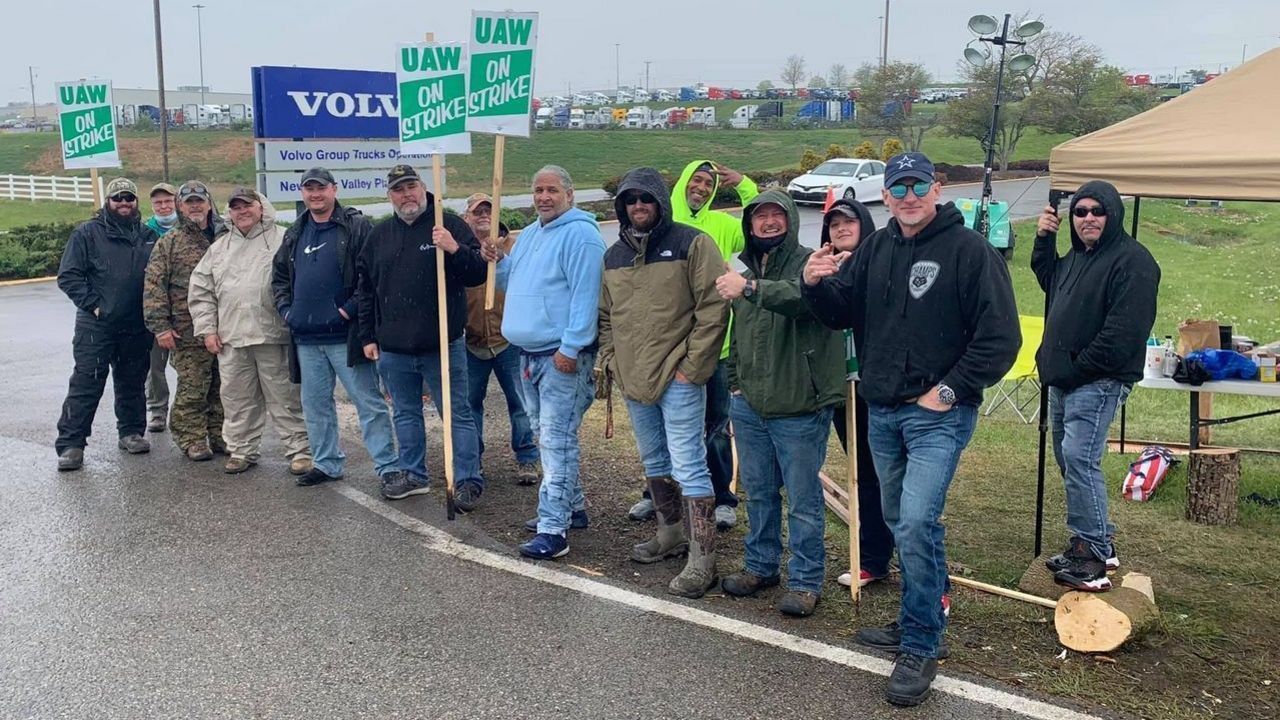 The ＾new￣ tentative agreement maintains the back-breaking 4×10 work schedule. It maintains the punitive point system for attendance, where a worker who arrives one minute late is penalized just the same as one who arrives four hours late. It maintains pay ＾raises￣ that will not keep up with inflation or health care costs. It removes language on the right to strike and adds language giving Volvo freedom to revise the agreement virtually at will.

We call for the broadest possible ＾no￣ vote this Sunday because the latest tentative agreement fails to meet any of our minimum demands.

Given the UAW¨s penchant for ballot-stuffing, we demand rank-and-file oversight of the vote. We all know there¨s overwhelming opposition to this deal, and we will not accept a ＾surprise￣ ratification by the narrowest of margins, as happened with our brothers and sisters at Nexteer earlier this month.

As the June 6 vote approaches, the UAW is giving Volvo a free hand to stockpile vehicles. The company is taking advantage of this unwarranted truce to dig in for a siege. The float has almost 2,000 trucks in it, just waiting for scab labor to finish them off.

In campaigning to push the contract through, the UAW has taken to threatening us with a prolonged strike if we don¨t ratify the agreement. Basically, they¨re saying: ＾Pick your poison: either accept six years of slavery or we will starve you into submission on the picket lines.￣

We say that a strike is our weapon. It must be used to threaten the company, not workers.

To the UAW, we demand to know precisely what you propose to do. If your strategy consists of isolating and starving us on the picket lines, this will not fly. We know where that ends. Since the PATCO air traffic controllers were betrayed by the AFL-CIO and allowed to be smashed 40 years ago, the unions have had an unbroken record of sellouts and defeats. But this time, we¨re not going down that road.

Volvo has a plan and a strategy to win. It¨s determined to force through its agreement with the UAW, ＾negotiated￣ behind our backs. We cannot succeed without our own plan and strategy, worked out to the end.

The Volvo Workers Rank-and-File Committee insists on the following conditions upon which a serious struggle against the company must be based:

1. Full income for striking workers. If a strike is necessary, we refuse to starve on our picket lines. We demand that Volvo workers have full access to the UAW¨s $790 million strike fund, which must be used to sustain our fight, not fund the golf trips and restaurant meals of the corrupt union executives. The UAW lectures us that adequate strike pay will rapidly deplete the strike fund. We beg your pardon, Messieurs Ray Curry, Rory Gamble and Matt Blondino, but what exactly is the strike fund for? This money is ours.

Opening the vault will send a clear signal to the company that we¨re serious about winning and are prepared for a protracted battle.

2. Unification with other Volvo workers. The deliberate UAW strategy of separating us from other workers at Volvo, particularly Volvo-Mack, ends now. The VWRFC has received many inquiries from workers at Hagerstown, Maryland, and Allentown, Pennsylvania, not to mention workers at Daimler Truck, Amazon and other workplaces. Workers want to unite. If the enemy wants to wage war on us, we must be prepared to open up new fronts in their rear, including at Volvo¨s operations in Sweden, France, Belgium, the UK, and Poland.

3. Preventing scab labor. The great tradition of mass picketing must resume to block scab labor and shut down operations at NRV completely. Any move to hire replacement workers must face the full mobilization of all Volvo workers in the US and worldwide.

4. Support and coordination with ongoing strikes. Isolation guarantees defeat. Workers in other factories and industries face the same ＾Amazonification￣ of the working conditions and attacks on their livelihoods as we face. We must send delegates to and coordinate with striking Warrior Met coal miners in Alabama, Vale Inco miners in Ontario, Canada, ATI steelworkers in Pennsylvania and other states, Massachusetts nurses and locked out ExxonMobil oil workers in Texas to prepare for a general strike if need be. Solidarity is not for us a mere slogan; it is the active, fighting unity of the working class.

5. An end to backroom negotiations. We insist that rank-and-file workers have access to all negotiating sessions in order to provide detailed daily reports to all workers.

6. No return to work without our minimum demands. We have nothing to discuss with Volvo or the UAW until we see a contract with 25 percent pay raises, an end to the tier system, no Alternative Work Schedule, five personal days for everyone, a $4,000 signing bonus, no increase in health care costs and full funding of retiree health care without premiums or co-pays.

Forty years of defeats must end. Strikes have been won in the past, and they can be won again. We are drawing a line in the sand, HERE at Volvo in THIS struggle. Let us prepare for a strike! Let Volvo fear us and not vice-versa!

＾Radium Girls￣ is exactly what you¨d expect from a collaboration between Morello and the Bloody Beetroots ！ monster guitar riffs paired with equally massive blasts of electroclash synths and stomping drums. Along with all the guest vocalists, the song was co-written with Jehnny Beth from Savages, Carl Restivo, and Pussy Riot¨s Nadya Tolokonnikova.

In a statement, Morello noted that ＾Radium Girls￣ is based on the true story of a group of Illinois factory workers ＾who were the victims of one of the most heinous crimes in U.S. industrial history.￣ He continued: ＾I spent every summer as a kid near Ottawa, Illinois, where these doomed girls used deadly radium laced paint to make glow in the dark watches. They were encouraged to lick the paintbrushes to a point to increase productivity and profit and in the end, their bones literally fell apart from cancer and they were so toxic they had to be buried in lead-lined coffins. The resulting court cases and publicity led to historic nationwide labor protection legislation. Every year I place flowers at the small monument to these quiet heroes and this song is dedicated to their memory.￣

＾Radium Girls￣ marks the first official offering from The Catastrophists, although the EP will also include a Bloody Beetroots remix of ＾Weather Strike,￣ a song Morello and Pussy Riot released in April.